It all began in 2001 when my long-time employer closed its doors. As one of the last machinists still working, and 28 years of loyal service, I found myself without work for the first time in my life. Fortunately, my wife, Terri, was able to put her graphic design skills to work to help make ends meet. This went on for a while, but with the job market in Mount Gilead waning, future employment for me didn't look very promising. It was at that time, we started developing "Plan B" -- our own machine shop. 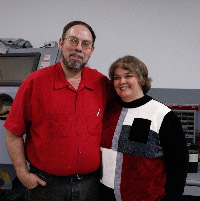 Tom and Terri - Owners and Partners of Snyder Fabrication LLC

Combining Terri's computer and administrative skills with my tool and die skills, Snyder Fabrication opened its door in 2002. It was a good combination. We already had the space and equipment since through the years we had been building up the shop for my "retirement playground." But circumstances made the decision an easy one and Snyder Fabrication immediately began providing custom machining to local businesses and manufacturers. We were officially a family-owned business.

In 2013, I finally did "retire." At  about the same time, I purchased my first Savage Axis rifle. I was disappointed in the small stock magazine so Terri and I decided to improve it. We started Snyder Magazines in 2014 and after several failed attempts, we finally had a winner. We developed our first high capacity magazine -- a 15-round .223. Now that we had found our niche, Terri went full-steam ahead and created our first website for Snyder Mags. I got busy on the production side of the business. Soon, orders started coming in and we were selling our magazines online. Terri became quite adept at "all things guns" and many customers commented how refreshing it was to "talk to a woman who knew about guns." She knew all the lingo! She had become quite knowledgeable and became the public face of our company.

Terri Snyder - Co-Founder and Owner - In the Shop

Nothing lasts forever, though, and four years into the business, Terri suffered a stroke. It was minor, and she was recovering well, but in February, 2018, she was back in the hospital and this time she did not come home. After a short sabbatical, I decided the best thing I could do for Terri was to keep her legacy going. After all, she was the face of Snyder Fabrication. She was the founder, the owner, the brains. I was just her side-kick.

Today, I am back in the shop full-time. We are launching a new web site, and moving in the direction Terri had planned. Sometimes it takes me a little longer - I am not as good on my computer as she was - but it's coming. Small steps moving towards my new normal. Sometimes I can hear her looking over my shoulder saying, "Not that one, Tom. You have to do it this way." It's been a challenge, and an emotional roller coaster, but I am getting better.

I think she would be proud to see where the business is going and how we are moving ahead. I know I am.